The Stonehendge of the Levant. Rujm el-Hiri. Gilgal Refaim. The Wheel of Spirits or the Wheel of Giants, referring to an ancient race of giants mentioned in the bible (were they the ones who built it?). It is an ancient site, 5,000 years old, in the Golan Heights. No one knows who built it or what they built it for. Were they the proto-Cananites, proto-Israelites? Could it be that I carry a trace of the blood of the people who built this place? 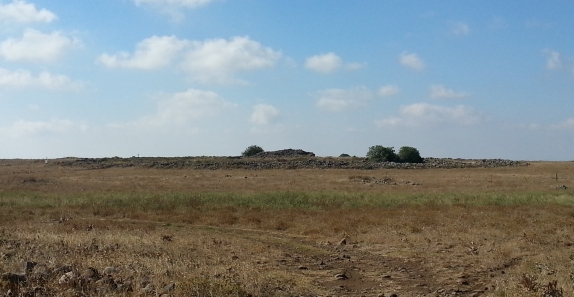 I found myself drawn to this site on the summer solstice, to participate in the solstice gatherings that perhaps were a revival of some ancient ceremony that took place there thousands of years ago on that day. Dozens gathered from around Israel to feel the power of this place and the cosmic alignment of the day, to meditate and to pray, to ask the ancient spirits of this place for blessings for the year.

It’s potent to be in ritual at an ancient sacred site. I could feel that we were a part of something that goes deeper in this land than even the Temple that Solomon built. We were dancing a very, very ancient dance, and the land smiled and sang to us its ancient songs.

The photos, the video documentaries, the tales and legends: nothing prepared me for the awe and grandeur of this place. As the micro bus came around the corner of the Cairo city streets and the landscape opened from concrete buildings to desert sands, I saw them. My jaw dropped and my eyes were fixed. My heart thudded and my whole body vibrated with wonder.  I don’t have adequate words to describe the feeling of being awestruck. The comparison that comes to mind is the moment in the movie Independence Day when the aliens arrived.

What magnificence to behold, to be in the presence of! Monolithic monuments to the powers that feed life. Or massive tombs of the pharaohs. Or ancient power plants? Whatever they were, they are still amazing. To build such structures would be a magnificent feat of architectural and engineering skill today. They are a testament to the sophistication and power of our collective ancient ancestors. It was a blessing to walk amongst them.

I’m tempted to say that the most impressive part of Luxor is its ancient temples, especially Karnak of which much was built during the reign of Ramses II (meaning that its stones could have been dragged and placed there by the Hebrews who were down there in bondage before the legendary exodus).

But for me, the most impressive part was Karam, the Muslim Egyptian man I met on the street who invited me to his home to eat dinner with his family. I accepted his gracious offer of hospitality. We walked from the west bank of the Nile, where we met, to the neighboring village on the outskirts of Luxor. His home was a mud hut, part of a compound of mud huts all attached to each other. Karam’s hut had only two rooms, the hearth and the bedroom. He and his wife slept in one bed and their four children in the other bed. The beds were mats, instead of mattresses, on top of wooden planks.

The other huts were occupied by his extended family: brothers and sisters along with all their children, and his mother, the matriarch of the compound. They were a family clan living all together in the materialistically “poorest” conditions I’ve ever witnessed with my own eyes. Egypt’s economy tanked after the revolution, and most Egyptians are struggling just to feed themselves. Yet they had wealth many Westerners seem to have lost and forgotten about, unconsciously attempting to replace with material resources that never quite satisfy a much deeper need.

This family clan had a deep treasure of riches in their souls. Though they had almost nothing, they rejoiced in sharing the little they did have with me, their guest. They found deep joy in giving, though they barely had anything to give. They found joy in having each other, in living in village, where no one will starve unless everyone is starving, because your neighbor is not a stranger, but is family whether by blood or otherwise, and thus they take care of each other. They boiled up tea and brought out a platter of fresh, homemade pita, cheeses, and ful to start with. My eyes watered a bit as I was deeply moved by their unflinching, unbreakable generosity.

They hadn’t had any protein in a month, and it was showing in the children. So I gave Karam money to buy chicken. His wife cooked up one of the most delicious meals I had the pleasure of feasting on during my time in Egypt.

After a post-dinner tea, Karam noticed my mini travel guitar. He asked if I would play something. I happily took the guitar out of its case and began a tune. The children were entranced. I saw no instruments around and could tell this was somewhat of a rare occurrence for them, to have live music in the hut. The extended family began to gravitate our way, Karam’s nieces and nephews poking their curious, smiling faces through the windows and door. Karam paused me and invited me to take the music out to the courtyard in the center of the compound so the whole family clan could listen. He said it would be treat for his mother. I gladly obliged.

We gathered in the courtyard, some thirty of us. Tune after they tune they clapped, danced, and hummed along. It felt good to share what I could with them, to shine our light together. A particular song, a prayer, flowed its way through into our circle. I began playing Matisyahu’s “One Day.” I’m not sure if they knew it already or just grasped it quickly, but the energy picked up and they ecstatically sang along each chorus. It felt like one of the most beautiful and important moments of my time there. We weren’t just praying for peace, we were living it.

I hoped to find Karam again on my way out of Luxor, at the spot by the Nile where he works, where we met. I wanted to gift him some more money to buy his children more chicken. But he wasn’t there. So I’m praying for him and his family. That they have health and continued happiness. That they have all they need. That the hearts of those who have more than they need crack open just a bit to the real need of their brothers and sisters and children with hunger in their bellies. May we care for each other as one human family.

The beach camps along the Red Sea in Sinai are not just paradise resorts of red sandy beaches in front of deep blue seas with epic desert mountains in the background (which they are). They are unintentional peace centers. Places where Israeli Jews and Egyptian, Jordanian, and Bedouin Muslims come together, in celebration, joy, song, and dance. It’s a testament to the power of music and art to bridge divides and bring people together. This, more than the world reknown snorkling in some of the world’s richest coral reefs, is my favorite part of the beach camps in Sinai.

Yesterday, in the afternoon before the blood moon eclipse, I walked up the mountain. The mountain that speaks. The mountain of Moshe (Moses). Mount Sinai.

I was with a crew of peacemakers: two Egyptians and one American I met back at one of the beach camps at the sea. We were led by a Bedouin guide who knew the mountain and the surrounding area like the back of his hand.

Almost the instant we began our trek to the mountain, I felt my ancestors’ presence. It was as if they had dropped whatever they had been busying themselves with in the other realm, and their attention, everyone of them, was on me. They were excited and curious. Someone was finally making the trek back to the mountain! After generations upon generations who never had the chance.

Note: this is Mount St. Catherine, which came into view on the way to Mount Sinai.

Something was tingling inside. I could feel my indigenous soul awakening, lighting up. I could feel its ancient love with the land. The memory of and connection with this mountain resides deep in our DNA. I felt a great honor and privilege to be making this pilgrimage, this teshuva (return), not just for myself, but for the generations before me who never had the chance. I invited my ancestors to walk with me to and up the mountain. To see this sacred place through my eyes, to feel it through my hands and feet.

The terrain was breathtaking. My soul was fed, with every valley, every peak, awe and grandeur and majesty. My heart cried with deep praise and gratitude when the mountain came into view.

I grabbed my lavender bundle out of my bag and prayed with it as we walked up the mountain. Deep prayers, for the world, for myself, for all my relations. I prayed as we reached the top. Night had fallen and the longest lunar eclipse in one hundred years had begun. Cosmic alignment that amplifies prayers and intentions, at the top of a great antenna and receiver. I found a spot at the top and spoke with the mountain and the moon. I was in prayer to the peak of the eclipse, until I was empty. I lit the lavender to carry the prayers up with smoke to where they could be heard.

After the celestial magic show of the eclipse was complete, I wandered back to where I had left my fellow pilgrims, between the church and mosque at the top. Everyone had gone to sleep. I found a spot on the ground, curled up under a blanket, and fell asleep as well under the stars. Predawn, the peak of the mountain became flooded with tourists from many parts of the world, who had arrived to witness the Sun rise over this place legends are made of. The light came and illuminated the epic beauty around us.

In the dawn light, I explored the top to see what the landscape I had traversed in the dark of the eclipse looked like. I was unable to find the spot I had prayed at during the night. It became hidden in the daylight, or it had only revealed itself for that moment the previous night. Something felt appropriate in that.

I felt well fed as we descended the mountain, though we only had tea and a very light snack. It wasn’t my stomach that was full, but something ancient inside of and around me that had been hungry. I hadn’t been aware of its hunger until we came to the mountain. This wasn’t just a pilgrimage, it was a feast for my and my ancestors’ indigenous souls.

“Deep in our bones resides an ancient, singing couple who just won’t give up making their beautiful, wild noise. The world won’t end if we can find them.” — Martin Prechtel